Time is passing us by. I sometimes have to stop and remind myself to enjoy it! There are bits of wonderful moments mixed into every day, as well as terrible ones but mostly we just live. Parenthood. It’s hard and tiring and overwhelming and underwhelming and infuriating and beautiful and simple and special and sacred. You know?

Lucas is a big growing boy and has such a tender soul. He’s sensitive and attentive and loooooves his Mama. He has special eyes for me, loves to laugh for his Daddy and watch his sister. 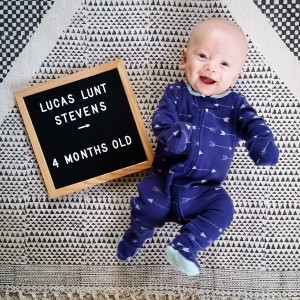 Lucas will not take a pacifier but regularly wants to pacify .. using me. It can make our nights rough. Last night specifically he spent the entire night in my arms (minus two hours that Lance took him). He usually needs to eat once a night, where he’ll actually eat a half or full feeding. Sometimes he’ll only wake up then. But other times he’ll wake up every hour or so and won’t be happy until he latches on me — and then falls asleep within minutes. Blah.

Lucas has yet to nap in his bassinet and instead sleeps in his swing (if I can keep Lila quiet enough) and in his car seat or carrier when we’re out and about. He eats every 2-4 hours during the day. How much he sleeps/eats at night varies, but he has given us up to 6 hours a few times.

Lance and I regularly talk about how different Lucas is from Lila when she was his age. He’s teaching us that he is his own person, even now. We sure do love him. 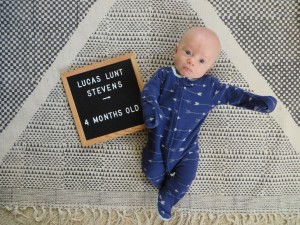 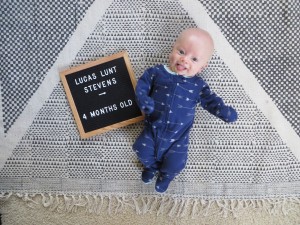 At his four month appointment, Lucas’ stats were: 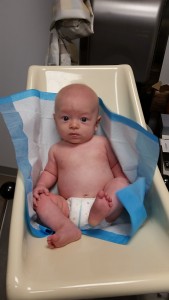 For the record, I weigh in at 137 lbs. That’s 9 lbs away from my pre-pregnancy weight! Most of my clothes fit, just not very well. #muffintop Still — the human body is so amazing!